Santorini is a volcanic Greek island. It is famous for white eggplant, dramatic views, stunning sunrises and sunsets from Oia town, and the active volcano in the town of Thira. Santorini has fantastic beaches, you can also find black pebble beaches and white and red sand beaches. The image above is Oia, known for unforgettable sunsets, probably the most charming cliff-perched place on the island.

Santorini is part of the Cyclades islands. In the 16th century BC it was devastated by a volcanic eruption which shaped its rugged landscape of today. The 2 principal towns, Fira and Oia hug the cliffs above an underwater crater.

Our Favorite Spots in Santorini

Ruins of a prehistoric village 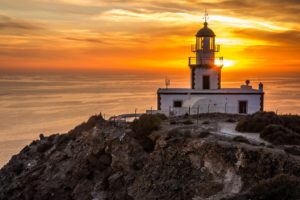 Volcanic crater in a picturesque setting

Mostly submerged volcanic crater with quaint hillside lodging, boat tours & panoramic seaside views. The Santorini caldera is a large volcanic caldera, much of which is submerged, which is located in the southern Aegean area, 75 miles from Crete in Greece.

Winery with tours & a patio with a view

Scenic winery offering walking tours, tastings & nibbles, plus an ample terrace with caldera views. The Union of Santorini Cooperatives, SantoWines was founded in 1947. Today, it consists of the largest organization of the island representing all the cultivators and counting 1.200 active members. SantoWines is committed to safeguarding the local traditional cultivations, producing highest quality Protected Designation of Origin (PDO) Santorini wines and products as well as promoting sustainable agriculture development.

Accessible by hiking, this ancient mountaintop city features ruins & dramatic ocean views. Ancient Thera is an antique city on a ridge of the steep, 1180 ft high Messavouno mountain on the Greek island of Santorini. It was named after the mythical ruler of the island, Theras, and was inhabited from the 9th century BC until 726 AD.

Small archaeology museum featuring ancient artifacts from excavations on Santorini. The Museum of Prehistoric Thera is located in Fira, on the island of Santorini in Greece. It was built on the site of the old Ypapanti Church which was destroyed in the 1956 Amorgos earthquake.

Skaros, also known as Skaros Rock, Fortress Skaros or Castle Skaros, is a rock formation and collection of ruins on the Greek island of Santorini.

Museum exhibiting various archaeological finds such as vases, frescoes, sculptures & inscriptions. The Archaeological Museum of Thera is a museum in Fira, Santorini, Greece. It was built in 1960 to replace an older one which had collapsed by the 1956 Amorgos earthquake. Its collection houses artifacts that begin from Proto-Cycladic marble figurines of the 3rd millennium BC, and continue on to the Classical period.

The Santorini cable car connects the port with the town of Thera in Santorini island in Greece. It was constructed as a donation of the “Loula & Evangelos Nomikos Foundation”. The cable car was built by Doppelmayr, has a capacity of 1,200 people per hour. The journey takes 3 minutes.

Where we Stayed in Santorini

This 5-star property offers access to a 24-hour business center, limo/town car service, and a meeting room. This Beaux Arts hotel also offers a library, a terrace, and tour/ticket assistance. For a surcharge, the property provides a roundtrip airport shuttle (available on request) and a beach shuttle. Onsite self parking and valet parking are complimentary.

Carved into the rugged Caldera cliffs, Mystique, a Luxury Collection Hotel, overlooks the turquoise expanse of the Aegean Sea that encircles the island of Santorini. Designed using Cycladic architecture, where gentle curves and sculpted arches blend with a muted colour palette and light enhancing spaces, the hotel is a favoured destination for honeymoons and romantic escapes, emanating a carefree spirit and exclusive feel, while offering gloriously open horizons. Linked by a network of cobbled pathways, Mystique’s 40 suites and villas, the two swimming pools, the rejuvenating Asian Spa the state-of-the-art gym, all boast panoramic sea views across to the active volcano that has shaped this exceptional island. The inspired dining options include Charisma for the freshest Greek-inspired cuisine in a truly memorable setting, Asea, offering fresh sushi with a Mediterranean flourish, while Captain’s Lounge, occupying the original site of a century-old mansion, caters for casual dining. -Mystique

This 5-star property offers access to a 24-hour business center. This luxury hotel also offers spa services, a terrace, and tour/ticket assistance. For a surcharge, the property provides a roundtrip airport shuttle (available 24 hours) and a cruise ship terminal shuttle.

Canaves Oia Suites invites guests seeking luxury accommodation in Oia Santorini to relish in the elegance of a most cherished holiday retreat. Freshly renovated luxury suites offering the ultimate in modern facilities and stunning views to the Caldera and the Aegean Sea, with spacious living areas and private plunge pools, ideal to house your memorable days and nights in one of the world’s most stunning sceneries. Enveloped by the emerald Aegean and the awe-inspiring dramatic beauty of Santorini, Canaves Oia Suites welcomes guests to a world of exquisite elegance. Blending spectacular vistas of the charming Caldera with over the top accommodation and impeccable service, those luxury suites in Oia, Santorini will charm even the most eclectic guests. -Canaves Oia Suites

In May 2018, Santorini welcomes a new kind of luxury in form of Canaves Oia Epitome. Perched above the picturesque fishing town of Ammoudi, the property is inspired by traditional Cycladic architecture, combining natural and earthy materials with modern design and style. It is the only property on the island that offers both sea and sunset views from the privacy of each of the 24 luxury villas. Canaves Oia Epitome invites you to experience life’s finest things. -Canaves Oia Epitome

When you stay at Canaves Oia Epitome in Santorini, you’ll be by the sea, within a 10-minute walk of Santorini Caldera and Oia Castle. This 5-star hotel is 7.2 mi  from Archaeological Museum and 7.9 mi from Museum of Prehistoric Thira.

Perched on a privileged location in the centre of the sophisticated Oia, one of the most beautiful areas of Santorini, Sunday Suites is a complex of 8 luxurious suites inviting you to discover what comfort and luxury really is about. The stunning panoramic views of the Caldera, the volcano and the Aegean Sea, the personalized and unique decoration in each of the suites with handmade charming furniture, the independent fairy-tale courtyards of every suite, as well as the omnipresent artistic atmosphere will make you rank our hotel in your favourites. -Canaves Oia Sunday Suites

With a stay at Canaves Oia Sunday Suites in Santorini, you’ll be on the boardwalk, within a 10-minute walk of Naval Museum and Oia Castle. This 4-star hotel is 5.7 mi  from Skaros Rock and 13.9 mi from Athinios Port.

At the sublime junction where the black volcanic sand of Perivolos Beach meets the midnight blue waters of the Aegean Sea, one finds Santorini’s newest addition—Istoria. The 12-suite retreat constitutes a new kind of hospitality for the island, where a stripped-down contemporary aesthetic animates a next-generation social hub for sophisticated travellers. -Istoria Hotel

When you stay at Istoria Hotel in Santorini, you’ll be near the bay, just steps from Perissa Beach and 9 minutes by foot from Perivolos Beach. This 4.5-star hotel is 3.8 mi from Santorini Caldera and 5.7 mi from Red Beach.

Tucked away within the medieval village of Megalohori, the enchanting Vedema, A Luxury Collection Resort has evolved from a 400-year-old wine cellar and a 100-year-old mansion into an authentic, Cycladic-styled property. Dedicated to the needs of seasoned travellers, Vedema houses 46 spacious suites and villas, all with their own terraces and many with jacuzzis or private pools. -Vedema

This 5-star property offers access to a 24-hour business center, limo/town car service, and a meeting room. This luxury hotel also offers a spa tub, a sauna, and a rooftop terrace. For a surcharge, the property provides a roundtrip airport shuttle (available 24 hours) and an area shuttle. Complimentary self parking and valet parking are available on site.

Whitewashed abodes, cobalt-domed churches, and black- and red-sand beaches mark the isle of Santorini, an alluring Mediterranean oasis mired in mythology. Believed to be the remaining link to the Lost City of Atlantis, rest in splendor during a luxurious stay in our clifftop retreat in Imerovigli, a village home to Santorini’s most emblematic views. Legend has it Euphemus, son of Poseidon created the island following a dream where he made love to a nymph – and after you enjoy your first sumptuous sunset from our infinity pool overlooking the Caldera, you will experience for yourself how easy it is to become entangled in the spell of Santorini. -Grace Hotel Santorini

With a stay at Grace Hotel Santorini, Auberge Resorts Collection in Santorini, you’ll be by the sea, steps from Santorini Caldera and a 3-minute drive from Archaeological Museum. This 5-star hotel is 2 mi from Museum of Prehistoric Thira and 6.3 mi from Athinios Port.

Traveloni is Here to Help

Call (800) 510-5642 and let Traveloni plan your next Greek Escape.
Trust in our travel professionals; let us handle the travel details so you can relax and enjoy!

×
CALL US
Or, send a message and we’ll get back to you